Manifestampe is celebrating the tenth edition of the Fête de l’Estampe on and around 26 May 2022 in towns and cities all over France and Europe. This great event devoted to engraving, lithography, screen printing and also digital processes is an ideal opportunity to celebrate printmaking in all its forms.

In the same spirit as the Fête de la Musique, this festival is a chance for artists, art galleries, museums, institutions and art schools to open their doors to the public. Art lovers, collectors, the simply curious, students, schoolchildren are all invited to discover the world of printmaking, to get together to admire contemporary or heritage works, whether in the intimacy of an artist’s studio or in the rooms of a great museum.

All the events, physical and virtual, are listed by region so that the public can plan their own discovery tours. The interactive map available on www.manifestampe.org records all the events as they are registered. Certain events are spread over several days, but 26 May 2022 remains the flagship day for the big event.

26 May is the day when the Edict of Saint-Jean de Luz is commemorated.

The art of printmaking is a relatively recent development in Western art, since it only really began to be practised at the end of the 16th century, when it started to develop alongside the paper industry. The rise of intaglio printmaking in the France of Louis XIII and Louis XIV gave several artists the idea that they could make money from it by creating a community of intaglio printmakers and sellers whom they could tax.  Each time they met with strong resistance from those that they were seeking to control, led by Abraham Bosse initially and then by Robert Nanteuil. The latter was appreciated by the royal court, especially after he did a portrait of the young Louis XIV, and the king was receptive to the reasons given by the artist in a memorandum sent to the chancellor of France, some extracts being reproduced word-for-word in the decree of Saint-Jean-de-Luz dated 26 May 1660, which made printmaking a “free art”.

Spotlight on one event during the 10th Fête de l’Estampe: 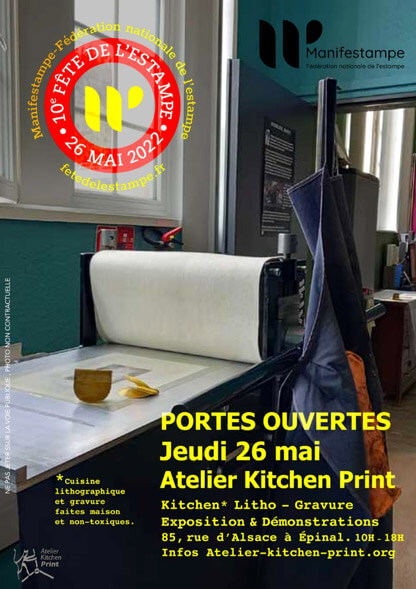 Émilie Aizier’s Kitchen Print d’Émilion studio will be opening to the public for the first time, at its new premises near Épinal town centre. The studio occupies part of a historical building, an old weaving and spinning school, the École de Tissage et de Filature de l’Est.

On the programme, demonstrations of Kitchen Litho printing, an exhibition of works from previous Biennales Internationales de l’Estampe organised by the studio and prints made by Art-Émilion.